Gentex struggled to find workers. It's hired 100-plus with help from a language program.

Gentex struggled to find workers. It's hired 100-plus with help from a language program.

Written by: Jordyn Grzelewski and Myesha Johnson
The Detroit News

When Rosa Estrada first applied for a job at Gentex, she couldn't make it through the interview because she didn't know English well enough.

She was hired months later after learning enough of the language to get by and has now worked for the automotive supplier for more than 20 years — but her early years there were not without challenges.

"It was very hard," said Estrada, corporate controller for the Zeeland-based manufacturing company. "I was very much in the ‘fake it till you make it’ box. I was trying to make sure that it would seem as though I understood English. And training was hard.”

Now, Estrada is part of an initiative at Gentex to remove some of those barriers to employment, retention and success for job candidates and employees who are not proficient in English — and, at the same time, broaden the company's talent pool amid industrywide workforce challenges. 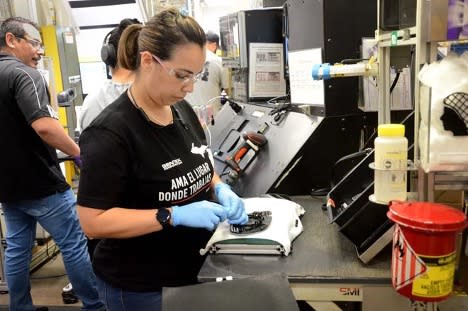 Gentex launched a Limited English Proficiency, or LEP, program in January 2021. The program aims to give Spanish-speaking workers opportunities for employment and better career paths within the company.

The initiative started out with a single Spanish-speaking manufacturing line on one shift. It now has grown to include more than 135 employees working on multiple lines and all three shifts — and it's been successful enough for employees and the company alike that leaders are eyeing ways to expand it to other Gentex facilities, job types and languages.

It also serves as an example of a company leveraging diversity, equity, and inclusion — or DEI — strategies to solve a business challenge.

“We had so many initiatives on the diversity side, and then we also had a problem to solve," said Estrada, "so these two things aligned."

Even before the coronavirus pandemic, Gentex — along with many of its peers — was struggling to hire enough workers.

Like other employers, Gentex boosted its wages in response to the labor shortfall that the pandemic exacerbated. Base pay for production workers now starts at $15.50 an hour for the first shift and $17.50 for the second and third shifts. The company also put in place a stock option program for hourly workers.

"We know that, especially with inflation, money is important," said Daniel Quintanilla, Gentex's director of talent acquisition. "But if you don't go to a job that you feel comfortable, that you feel cared for, it doesn't matter how much money you're making."

Company leaders realized they needed to be more competitive not just against other manufacturing businesses, but employers in other sectors, as well. They started thinking up ways to make Gentex a more attractive employer. The data were right in front of them: West Michigan has a large — and growing — Hispanic and Latino population that the company had not always done the best job of leveraging. 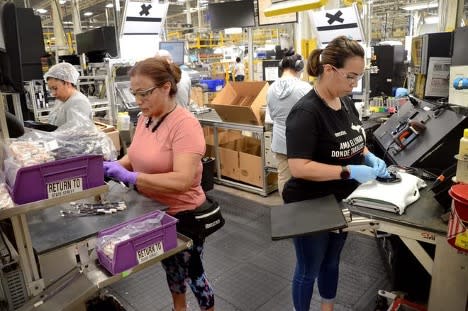 "The pandemic kind of escalated it, as we needed the workforce," said Quintanilla. "And in this community, such a heavy concentration of Hispanic, Spanish-speaking people … We knew that we were turning away people that could do a good job because they couldn't communicate in English."

Hispanic and Latino residents make up about 6 percent of Michigan's population, according to U.S. Census Bureau data, but more than 10 percent of Kent and Ottawa counties' populations, from where Gentex draws much of its workforce.

Hispanic and Latino residents make up more than 22 percent of the nearby city of Holland's population, and Spanish is the second most common language in the region after English.

West Michigan "made significant gains to population and progress in terms of racial diversity" even as the region faces "looming workforce challenges, including a shrinking population of young people," Grand Rapids-based economic development organization The Right Place noted in a September release on new U.S. Census data.

"As diversity increases in West Michigan, employers will increasingly need to prepare to welcome workers from different cultures and background," the group said.

And according to the U.S. Department of Labor, the number of Hispanic workers contributing to the economy is steadily growing. In 2020, there were 29 million Hispanic workers in the U.S. — a 171 percent increase since 1990. The agency projects that number will reach 35.9 million in 2030.

The Hispanic proportion of the workforce increased from 8.5 percent in 1990 to 18 percent in 2020. And in 2030, the Bureau of Labor Statistics projects Hispanic people will account for 1 in 5 workers in the labor force.

Meanwhile, amid the pandemic, quit rates in the manufacturing industry rose from 1 percent in April 2020 to 2.5 percent in December 2021, according to labor statistics.

"A labor shortage crisis creates the conditions in which some organizational leaders recognize they have to make new changes and if these are the workers that are going to come and they're going to do the work, then they have to create an environment in which those workers can be productive, thrive, and help the company," said Rubén Martinez, a Latino labor expert and professor of sociology at Michigan State University.

LEP program gets off the ground

Gentex, meanwhile, is the largest employer in Ottawa County, with more than 5,300 workers.

Founded in 1974, the manufacturer supplies automatic-dimming rearview mirrors and electronics to the auto industry, as well as making products for the aviation and fire protection markets. Just last month, the company announced a planned $300 million expansion of its operations in the city of Zeeland and Zeeland Charter Township that will create 500 new jobs.

Gentex supplies content to more than 30 original equipment manufacturers and for more than 650 vehicles globally. It's a public company with a market capitalization of about $6.9 billion and net sales of $1.73 billion in 2021.

As the idea for a Limited English Proficiency program took shape, Scott Ryan — Gentex's vice president, general counsel, and corporate secretary — convened a steering committee for the project. The group, made up of employees from different divisions of the company, met weekly and started putting plans in motion. 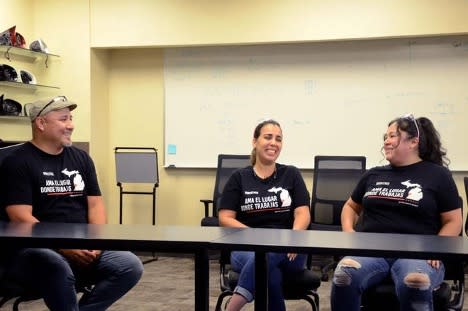 "We knew that we didn't want to do that without making sure that whoever we brought in would feel included and be a part of the rest of the organization," said Quintanilla. "It doesn't make sense to include someone and then segregate them immediately. So our process was very meticulous, very patient, because we wanted to make sure that we had everything in place before we brought in that first person."

To that end, LEP program members also have on-site access to English as a Second Language, or ESL, classes. The program also helps prospective employees by providing applications and job interviews in Spanish.

And program leaders say the project is designed to enable Spanish-speaking employees to develop career paths within the company. Already, more than 15 LEP participants have been promoted to leadership positions in manufacturing, human resources and recruiting.

The steps taken by the company were helpful to Elizabeth Rodriguez, 45, and Odeimys Perez-Napoles, 36, production workers at Gentex who are part of the LEP program. Perez-Napoles, who is originally from Cuba, has now been at Gentex for more than six months, and Rodriquez, who is from Mexico, has worked there for more than a year.

The women said their experience so far has been positive, thanks in large part to the trainers and supervisors who have worked with them one-on-one.

Both said they had previously faced challenges in the workforce, whether it was struggling to find a job because of the language barrier or not feeling supported where they worked. They also were encouraged by Gentex making key documents available in Spanish so they knew what they were signing.

Perez-Napoles has a business degree from Cuba and hopes to someday put it to use in the U.S. once she improves her English skills. Rodriquez aspires to help other participants in the LEP program. Both hope to move up within the company.

"They just want to continue to grow," said Rudy Perez, a former LEP group leader who now works in HR to support the program and translated an interview with the two women.

Gentex credits the program with recruiting employees it otherwise would not have at a time when manufacturers desperately need talent.

The manufacturing sector has been forced to adapt to the competitive labor market. Companies are reducing educational attainment requirements, offering incentives like sign-on bonuses, relaxing certain screening policies, and taking steps to speed up their application and hiring processes.

And some companies, like Gentex, have taken steps to be more inclusive in their hiring practices as they attempt to broaden their talent pools.

Meanwhile, in another marker of success, Gentex reports that its LEP participants have higher attendance and retention rates than its overall workforce.

“This not only helped these LEP lines and areas, but it helped Gentex as a whole get better at what we do and how we listen, how we react," said Quintanilla.

Estrada attributes the success of the program to few a key factors: an uncommon level of commitment to the project by everyone involved in making it happen; collaboration among employees from different departments; and support from the very top of the company.

Gentex CEO Steve Downing, for example, sent out a company-wide note about the program, which she believes made a big difference.

"That really set the tone," said Estrada. "When you have the CEO say, 'This is happening,' everybody else gets on board pretty quickly."

Rene Rosenbaum, an economist and professor at MSU, pointed to the competitive labor market and demographic trends nationwide and in West Michigan to understand Gentex's strategy.

"I think we're starting to push back in terms of the population, the demographic change and the recognition that we shouldn't be afraid of cultural shifts, but really tap into the resources that these shifts can provide," he said.

The Hispanic working population in the U.S. is projected to make up 78 percent of net new workers this decade, Rosenbaum noted. And being bilingual is a key skill wanted by employers so that companies can communicate globally and meet the needs of local customers.

"Gentex is smart to invest in a workforce infrastructure that will take advantage of the fastest growing workforce group," he said. “I think it’s a very useful, creative and innovative approach to meet the labor supply needs, but also it's a safety issue to be able to communicate effectively on the plant and it improves performance."

Looking back, Estrada feels certain she would have benefited from such a program when she was a new employee at Gentex after immigrating here from Mexico. She got by, went back to school to get degrees in accounting, and eventually worked her way up in the company — but it didn't have to be that difficult.

"When I see all those employees coming in, it gets me every time," she said. "And when I think about the anxiety — I could have been trained faster. I could have probably done a better job from the beginning. And more than anything, I could have felt like I didn't have to hide part of who I was."

For a long time, she did hide parts of herself while she was at work.

"I didn't want to ask certain questions because, how am I going to pronounce it? I'm going to sound stupid, or I'm going to blow my cover. I've been pretending this whole time I know English," she said.

"So to know today … that's not the case for 130 people that work here now and hopefully hundreds to come," she said, "you really can't put a value on that."